Review - A Tale for The Time Being by Ruth Ozeki 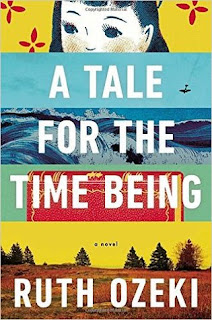 This magic realism novel had caught my interest by it colourful cover and Japanese source. It follows the story of the author finding a diary from a young Japanese girl describing her life as she lives it.
For some odd reason the author feels a connection to the owner of the diary and decides to pace herself and read at the same rate the diary was written. The young girl who lived in America moves back to japan with her family to find that they are now poor because her dad has lost his job and lied about it. Integrating into the Japanese school system wasn’t easy since she became the target of constant and cruel bullying pushing her to consider suicide very seriously not knowing that her father is thinking of the same thing. Her life is changed with the arrival of her grandmother the nun who invites her to spend the summer break at the temple. The young girl does not shy away from reality and tells her story without inhibition. She describes very graphic scene whether it being her bullying, her time at the French café or her thoughts of suicide. All the while the author is having strange dreams about the nun and the linearity of time creating a deep connection with the girl and the past.
I love how the story felt raw and authentic but I hated how the little girl suffered the bullying without fighting back, kicking or screaming. Sometimes she just let them be and do what they want. My blood boiled at those passages and I couldn't read the book for a while. This is just another testament to the rawness of the writing.
Despite the book's dark subjects, there is very beautiful imagery described either through the author or the girl. The emotions that flow through the pages in a brilliant manner is an homage to writing and the intimate form of sharing ones thoughts immortalizing them through time in diary or a novel.


A beautiful book for those looking for a heavy subject but a brilliant story.
Posted by Unknown at 10:00 AM

Email ThisBlogThis!Share to TwitterShare to FacebookShare to Pinterest
Labels: 2013, 4/5, A Tale for The Time being, japan, Magic realism, review, Ruth Ozeki, suicide, Viking