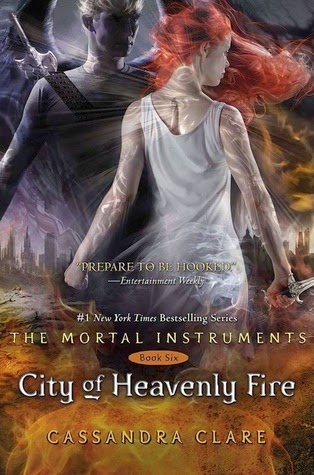 The only reason I embarked on this journey to read  books is the movie. Yes, I know. It should have been the opposite effect but City of Bones caught my attention by it cheesy acting and the premise of the story with the painting trick Claire and her mother have. In the course of last year I read all six books whenever I was able between classes and exams. Since It's been such a long time form my first book of the series, I only remember what I felt while reading it so some facts might not be accurate.


I really liked the first three books. They were full of action, plot twists and through all of this we got to know more about the hidden world of the Shadowhunters. I also liked to see Clary adjust to her new reality and try to make sens of her feeling all the while trying to stop an evil the Clave refuses to acknowledge.
The fourth book was really lacking. There was no action and it jumped from one conversation to another with little understandable connection and bad plot flow. It was a book mostly about defining the relationship (DTR) between everyone which barely moved the series' plot. Despite all of that I did not want to stop reading because I was curious about what will happen to Clary an Jace. The fifth book was better since Sebastian is shown under a different light and more is known about him. His character's evolution or at least the evolution he let on around Jace and Clary was interesting to see. That little glimpse of hope of redemption for him was well placed by the author. Another great element is the struggle between Clary and Jace where She is torn between what she believes is real and what she desires. The burning passion is palpable and it keeps the reader on edge.
The last book of the instalment is a good way to end the series. It is full of action, placed in an another dimension filled with demons making the stacks even higher for our heroes.
It was great to see  the real Jace after all the hiding under sarcastic remarks an tough pretenses. Although his struggle with himself was a bit stretched when Clary had to remind him every now and then that he is not like Sebastian and make him see the good in himself.
All in all I enjoyed reading the series and despite some plot flow problems and unnecessary scenes the story has a refreshing feel and a sympathetic set of characters.
There is a prequel and a sequel prepared by the author for those who still want to live in the Shadowhunters' world, plus the Bane's chronicles are for those who are charmed by the cat-like-eyes of the Warlock.