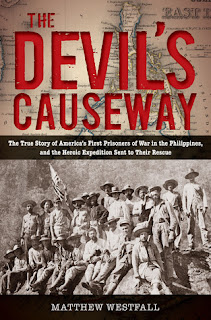 The Devil's Causeway is a fascinating story about the hardship a group of american soldiers who went to the the Philippines in a mission to free Spanish soldiers, but because of one selfish decision, they became the hostages instead.
It is clear that the author, Matthew Westfall, spent a great amount of time researching his story since it is told with great details. The reader comes to know the life that every person involved left behind as they traveled to the Philippines. This made the first part of the book a bit heavy and hard to go through, but by understanding the personality of each, it allows a better flow to the rest of the novel.

I personally love the last part since there was more action and decision making. The chase, the confrontation, the fight against the enemy and against disease, the chase of the promised glory and the scared lives of the soldiers were all described in a captivating fashion.

This military historical novel does not only bring the facts to the reader, but also the emotions of the people involved  I felt the fear of the soldiers, the anger of the captains and the sorrow of the waiting mothers. I felt sacred at times and at others I felt worry.

I defiantly enjoyed reading this book and recommended to the curious-minded.
Posted by Unknown at 12:41 PM