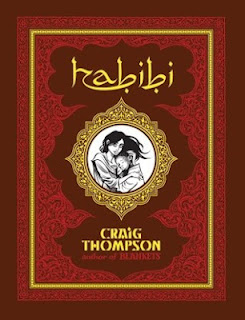 A unique comic book. The story unfold in a fictive Arabic country where the majority are Muslim, but there are still slaves, concubines and sultans.It has the feeling that it is in the medieval era but there is electricity and motorcycles. The mix between the old times and a couple of modern elements is internesting and is a welcomed twiste to the imaginary world in which Dodola  and Cham meet. The unique love story in that horrible and harsh world makes one wonder how much one is willing to sacrifice to stay true to him/herself and continue on the same set of values that might put him/herself in danger or even cause problem to his/her loved ones.

I was very skeptical of the use of the religious content. I know that the author did his research for the book, but still it is a work of fiction and it is not to be taken seriously on important matters such as religion (well it is for me. I know  some would disagree with me, but I respect their opinions). I have to say that I am thankful to the author for taking great care of not drawing the face of the prophet Mohammad, because it would have changed the way I  received the book and the way I review it. I think this is a sign for his respect and understanding of the Muslim culture.

Although, the story is unique, the work of art is just fabulous, I did not like the over the top sexual scenes that were presented in the book. I know the sexual themes is part of the core of the story, but still I think there should have been somethings left to the imagination. Another thing I did not like is the cover art work. It looks like the Quran. I just did not feel comfortable reading.


All in all, apart of the over-explicit scenes, I liked the comic and would only recommend it to 20 years old and olders audience.

Have you read anything exotic recently? A book with a unique twisted  story?