Review - House of Many Ways by Diana Wynne Jones 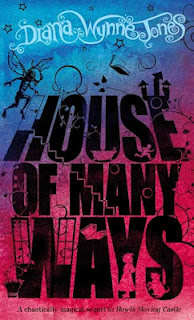 
This is the second squeal of Howl's moving Castle. Therefore, I expected it to be as much fun as the last two books.
Unfortunatly, it was not. I was really disappointed. What I loved about the last two books is the colourful imagination that they evoked. House of Many Ways lacks in that aspect and it has a darker feeling to it, specially with the Lubbock. Maybe I am being subjective because I hate insects, but I did not enjoy the idea that Lubbock can lay their egg inside a human. That is way too disgusting and scary for the targeted readers and me. Also, I did not connect with the characters as much I did with Sophie and Howl.
Of course, it was not all that bad. I liked the house's magical doors which reminded me of Howl's Castle and the dog Waif. It is adorable. I reminded me of the dog in the movie.
In general, House of Many Ways it not the best sequel.

P.S. I was really sad when I know about the death of Dianna Waynnes Jones. I like her style of writing and knowing that there won't be anymore books from her is a sad thought.