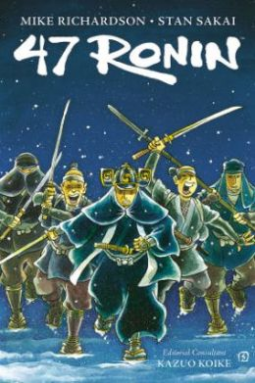 My interest in this comic sparked when I saw that Keanu Reeves starred in a new movie with the same title. I was intrigued to see what was the story and how a comic carried it.

The comic had all the element that I expected from it considering it was about an ancient era in Japan. There was samurais, fights, loyalty, honer, wisdom and cherry trees. Mix all of that with a unique art and you get a great comic.
The story was great. It had a well written plot and the arrangement of the comic added to the fluidity of the story. The art was unique compared to most of the comic produced by Dark Horse. It had, if I dare say, a simple approach to the drawing with great details that brought the essence of the era thought it. I found out later that the art was inspired by a late 1800s Japanese artist Ogata Gekko. This allows the comic to capture many japanese cultural elements and presented as close to reality as possible.
None the less, this wonderful work of fiction (based on japanese ancient legend) have the perfection combination of a unique art and a thoughtful story bringing back to life 47 Ronin to tell their tale once again.
Posted by Unknown at 10:00 AM