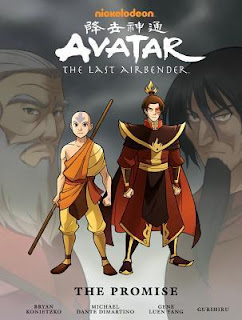 The reason I read this comic book is because I  liked the TV series.I watched all the episodes plus the new sequel about Korra.
I like the world this story creates and the characters are amazing specially Zuko's character.
I always had a thing for the anti-hero or the bad-turned-good kind of guy. The duality in Zuko's personality, his search for what is right or wrong within him gives him more depth and therefore interest and attraction. His struggle makes him a sympathetic character.

Through this comic book, the story comes back to life once more. Even though it is not in a moving pictures setting, the pages brings out the sense of movement in every scene and recreate the imaginary world in the readers mind. This is not a easy thing to do, specially since the artists have the standard of the TV show to live up to.

The commentary on the side by the authors and artists added another dimension to the comic book. It is their way of giving the reader a VIP access to the backstage of the production and maybe even a couple of hints on what will happen on the rest of the series with the release of The Search which is expected to be available to the public by 20th of march 2013.

All in all, I truly enjoyed the comic and would definitely read the rest of the series.

If there is any possibility to put my hand on an ARC of the new comic book, please E-mail me.

Have you read any comic books or manga lately? Do you recommend any?