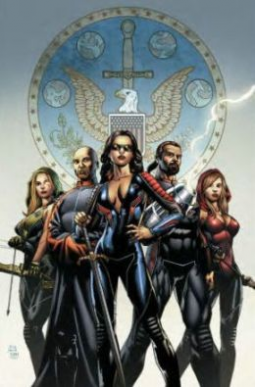 I chose to read this comic because it promised to bring together multiple legendary characters together. Snow White, Red Riding Hood, Robyn Hood, Captain Hook, Van Helsing are all there fighting for the survival of the human race against the raging Greek Gods.

I liked what the author did with the characters. He brought fairy tale characters into a modern world giving them superhero powers. Also, Characters like Robyn Hood and Van Helsing who are originally male are females in this comic tipping the balance in favour of the other sex. This is a great move to be anti-stereotypical since most comics have only one or two females characters even less powerful and strong women.
Still, the comic fell short for me since it had so many side stories that I had to already know about to understand the tension between certain characters. I felt overwhelmed by the number of comics This one referred to.
Another minus, is the hinted relationship between several females characters. I didn't feel comfortable reading this kind of murky plot specially that it felt like it only purpose is to feed some sort of fantasy. The art did not help either by hyper-sexualizing the female characters.
Since I was confused throughout the comic and I wasn't able to enjoy how the author refashioned these loved characters, I can't really recommend this comic unless for someone who is ready to read all the other back story comics before hand.
Posted by Unknown at 10:00 AM